Bad boys, bad boys, what you gonna do?

A social revolution is underway that most of us are blissfully unaware of. Its causes are fuzzy, but its consequences are likely to be significant: it could radically alter how we work, whom we marry, how many children we have, and, perhaps in the extreme, the likelihood of conflict. This social revolution is a relatively recent phenomenon. We’ve seen it emerge only in the last two decades, but it’s accelerating at a rapid pace. Welcome to the era of the widening gender gap in education.

Girls, nowadays, outperform boys at astonishing rates, both at school and at university. Two new studies, both by economists at Stellenbosch University’s Research in Social Policy unit, attest to this. First, a study by Chris van Wyk, Anderson Gondwe and Pierre de Villiers follow all 2007 Western Cape Grade 6 learners (77,633) until matric in 2013. They find that men are 29% more likely to have dropped out of school by 2013 compared to their female counterparts. These results confirm nationally representative studies of reading and math scores. Hendrik van Broekhuizen and Nic Spaull show that the gender gap in reading at South African primary schools is one of the largest in the world. But it is also in mathematics, a subject where boys traditionally outperformed girls, where the closing and then widening of the gender gap is most evident. Says Van Broekhuizen and Spaull: “In the 2000 and 2007 rounds of SACMEQ, South African grade 6 girls outperformed their male counterparts, but this difference was not statistically significant. However, in the more recently conducted TIMSS-Numeracy assessment of 2015, grade 5 girls outperformed grade 5 boys by a statistically significant margin of 16 points. This was the fourth largest (pro-girl) gender gap in mathematics of the 49 countries that participated.”

Not only do girls do better than boys at school, women outperform men to an even greater extent at university. Van Broekhuizen and Spaull follow the 2008 matric cohort, and show that, while girls obtained 27% more bachelor passes in matric, more females access university (34% more), and considerably more females complete any undergraduate qualification (56% more) or any undergraduate degree (66% more). These gaps exist for all of South Africa’s race groups, although it is slightly bigger for white and coloured students. The pyramid summarizes the gap at every level: for every 100 females in matric in 2008, there were only 8 females that earned any undergraduate degree by the end of 2014, and only 5 males. 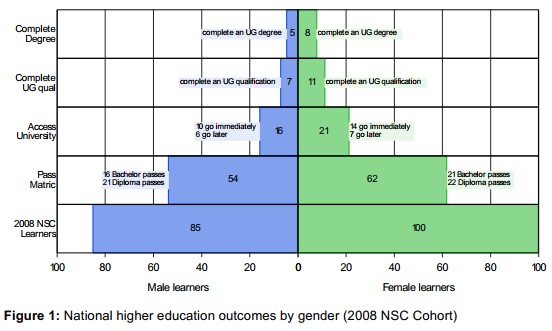 We don’t yet know what explains this gap. One argument, with some supporting evidence, is that women have more traits and behaviours that are favourable to schooling in its current form, also known as non-cognitive skills. These skills include self-control, self-motivation, dependability, sociability, perceptions of self-worth, locus of control, time-preference and delayed gratification. But why exactly these non-cognitive skills have become more valuable in the last two decades is not entirely clear. Others have pointed to technological change, particularly in computer and video games, as an explanation for why men are performing worse. But that does not explain gender differences at very young ages.

What is more interesting, though, is to think through the likely consequences. The most obvious is the effect on the job market. Graduates have a much lower unemployment rate (5%) compared to those without any tertiary qualification (33%) in South Africa. If more women have degrees, women are likely to have significant lower unemployment rates than men. And because the best students in almost all subject fields are now women, they are likely to find the best jobs, and move up the job ladder quicker.

We know that men have historically held the majority of high-ranking positions in the workplace, and this outcome can do a lot to balance things out. But it is also important that we think carefully through the full range of consequences. People prefer to match on education, meaning that women prefer men with a similar level of education, and vice versa. What does the gender-unbalanced pool of graduates mean for finding your soulmate? If women become the main (or only) breadwinners, how will that affect family planning? Women already face a more difficult trade-off than men between having to balance a family and career – will this cause fertility rates to fall further, especially for those at the upper-end of the income distribution where the gender gap is most pronounced?

And what of the men? Will they be happy to step in and take up more of the family responsibilities? In a world that increasingly rewards human capital, a large pool of unskilled men will find no outlet for their only productive resource: manual labour. If these men, without proper interventions, become more indolent and isolated, what are the likely political and social consequences? It is not surprising that the political extremes are often dominated by men. Men already outnumber women in all major crime categories. If unchecked, violence and conflict, at the household, community and international level, will in all likelihood increase.

It is natural to ask what can be done about this. Those who argue that the cause for the gender gap is the sudden increase in rewards for non-cognitive abilities would argue that the schooling system can do more to nurture these traits in men. Others would argue that the technological change that make men less productive – like video games – should be taxed.

Others, again, will say that it is pointless to intervene – why should we care about men when women have been suppressed for centuries, and many remain the victims of abuse and dominance? I would argue that that is exactly why we should care about the rising gender gap in education: if we don’t, the consequences are likely to be dire, for men and women.