Which policies create economic growth? An updated view of neoliberalism 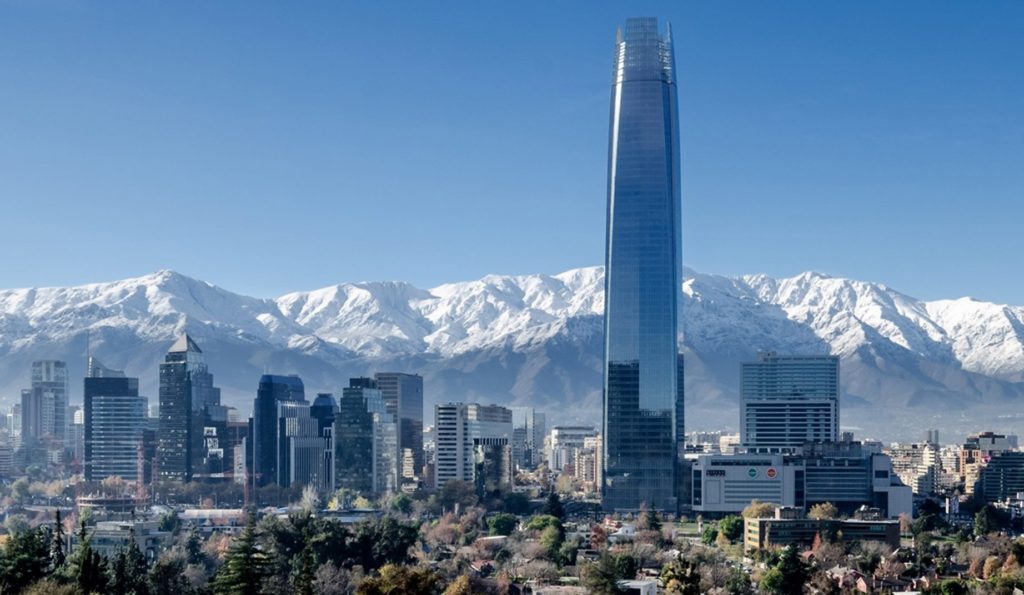 Bill Easterly has a new research paper. Easterly is Professor of Economics at New York University and co-directs its Development Research Institute. He has written extensively on the pitfalls of development aid and, as associate editor of the Journal of Economic Growth and author of The Elusive Quest for Growth, is one of the leading scholars globally to think deeply about the factors that cause economic growth.

Easterly has been critical of the Washington Consensus, a package of market-oriented reforms proposed in the 1980s and 1990s by institutions such as the International Monetary Fund and the World Bank, policies which have broadly been labelled ‘neoliberalist’. These policies were particularly harshly applied to many crisis-hit African countries in the 1980s, when the International Monetary Fund had to step in and prescribe ‘structural adjustment programmes’ to help return many African economies to solvency. Severe budget cuts were often part of the reform requirements. This is why many Africans still consider these programmes to have not only been unsuccessful – growth did not immediately return – but see the IMF and World Bank as evil.

It is not only in Africa that this package of policies has had a bad rap. Academic economists, notably Dani Rodrik, a Professor of International Political Economy at Harvard’s Kennedy School and a member of Cyril Ramaphosa’s Economic Advisory Council, has been critical of these reforms across Africa and Latin America. In 2006, he wrote: ‘Proponents and critics alike agree that the policies spawned by the Washington Consensus have not produced the desired results…it is fair to say that nobody really believes in the Washington Consensus anymore. The debate now is not over whether the Washington Consensus is dead or alive, but over what will replace it.’ Eearlier this year, Rodrik co-authored a paper with two young economists, Suresh Naidu and Gabrial Zucman, calling for an ‘economics after neoliberalism’.

But perhaps the apparent lack of success of the neoliberal reforms of the 1980s and 1990s should not be dismissed so quickly. That, in short, is the argument Bill Easterly makes in his latest NBER Working Paper.

Easterly shows that ‘bad policies’, things like black market premiums above 40% or inflation rates above 40%, were common worldwide in the 1980s. Because of neoliberal reforms, the frequency of such bad policies fell substantially in the 1990s. The strange thing is that this ‘policy revolution’, shown in the figure, has received very little attention in the previous literature. 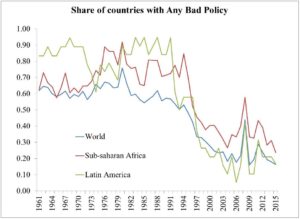 Why were previous commentators then so critical of these reforms? Says Easterly: ‘When new reforms are announced with as much fanfare as the Washington Consensus, there is pressure to evaluate the reforms as soon as possible. This can lead to … premature pessimism about reform before the reform process is even complete and before enough post-reform growth is available. Later results may show this pessimism to be mistaken, but there is much less interest in evaluating reforms by that point. This may help explain why it is so difficult to do reforms and why corrections to extremely bad policy outcomes are delayed.’

Using regression analysis, Easterly shows that the decline in bad policies are strongly correlated with improvements in economic growth. When most commentators were making claims about the impact of the policy reforms (or lack thereof) in the mid-2000s, they were using a 2001 World Bank dataset that had not yet accounted for the rapid economic growth that many countries would experience from the 2000s onwards.

Even though Easterly, too, was critical about the neoliberal reforms – in 2005, for example, he said that ‘repeated (structural) adjustment lending… fails to show any positive effect on policies or growth’ – he is happy to change his mind based on new evidence. The reforms, it seems, had a profound but delayed impact: fewer ‘bad policies’, he shows, did cause economic growth, particularly in those regions, like Latin America and Africa, that were most likely to have had bad policies in the 1980s and earlier.

The lesson is obvious: the package of Washington Consensus policies – reducing inflation, cutting government deficits, lifting state restrictions on international trade, and lifting subsidies and state controls – was instrumental in getting rid of bad policies. Once these bad policies were removed, economies began to grow, although this was often delayed by a few years.

This is of particular relevance for South Africa too. It takes time for good policies to replace bad policies, and for those good policies to begin to boost economic growth. Let’s not fall into the same trap of premature pessimism in dismissing the changes since 2017 – slow as they may feel – towards good policy. There is no quick fix and no alternative: as history shows, good policies are the only route to the kind of economic growth we desperately need.