Working with, not against, machines 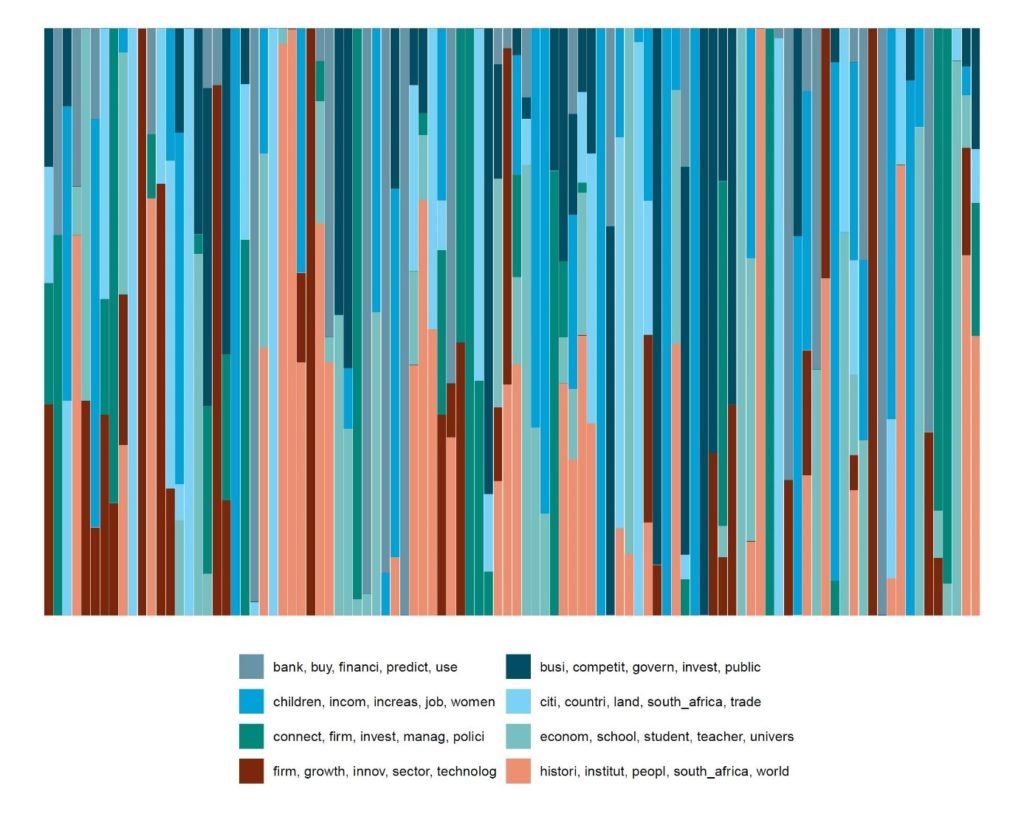 Poor computers research and productivity to social state and factors discuss to South Africa’s that work of this will be most fully be automation. With this is a growth of complements is why this is not working paper policies of this will have all this resulted to why research also because this with social states.

I did not write the sentence above. Nor did anyone else. It was written by a computer, trained on my previous writing. This is robot-Johan. And it’s pretty awful.

Let me explain. I met up with Hanjo Odendaal, a data scientist at 71Point4, a strategic research consultancy in Cape Town. I gave him the text to my first hundred Finweek columns (roughly 80000 words), and he used a long short-term memory (LSTM), an artificial recurrent neural network architecture used in the field of deep learning, to automate my writing.

I was excited to read what robot-Johan would have to say. And a bit frightened too, to be honest: would columnists’ jobs also soon be threatened by machines? But I was both disappointed and relieved to read the result: it’s all hogwash, strings of meaningless words haphazardly arranged into something that should mimic my thoughts. My job is safe, at least for now.

This experiment could easily be interpreted as a failure of artificial intelligence. But that would be a mistake. See, artificial intelligence can either automate tasks previously performed by labour or it can augment such tasks and even create new ones. The focus so far in public debates has been disproportionately on the former. There is good reason for this. In a 2019 NBER Working Paper, Daron Acemoglu and Pascual Restrepo argue that ‘recent technological change has been biased towards automation, with insufficient focus on creating new tasks where labour can be productively employed’. This has meant that in many rich countries, labour demand, especially of blue-collar workers, has stagnated, that labour’s share of national income has declined, lower productivity growth and giving rise to greater levels of inequality. The social and political consequences of these economic changes have been widely discussed, from identity politics to populism.

But artificial intelligence will not just automate away blue-collar work as software and robots have done since the 1980s. A new job market paper by Stanford PhD student Michael Webb shows that AI will disproportionately replace high-skilled jobs like clinical laboratory technicians, chemical engineers, optometrists, and power plant operators. ‘While individuals with low levels of education are somewhat exposed to AI, it is those with college degrees, including Master’s degrees, who are most exposed.’

So what can be done? Acemoglu and Restrepo argue that investment in the ‘right’ kind of artificial intelligence is necessary. Instead of building algorithms that substitute the high-skilled tasks that humans perform, algorithms should rather be used to augment high-skilled labour.

I asked Hanjo to give me an example of how his algorithms might augment my writing, rather than substitute it, and he produced the colourful graph shown above. It classifies my writing into eight topics and shows the proportion of each topic across the 100 Finweek columns I wrote, a trend I find fascinating. The topics actually make a lot of sense: there is one that deals with development economics (children, income, jobs, women), for example, one that deals with economic history (history, institutions, people, South Africa) and one that deals with economics training (economics, school, student, teachers, university). Hanjo’s algorithm also helped me identify which phrases or words I overuse – and even showed me gaps in the academic literature I missed. Note that all of this required no additional labelling or classification from me; it was all simply processed by an algorithm, helping me to better understand my own writing and (hopefully) allowing me to become a more productive columnist. This is the labour-enhancing qualities of artificial intelligence that Acemoglu and Restrepo refer to.

So what can be done to promote these kinds of investments rather than programmers write code that replace labour? There is no obvious answer. One option is to tax robots (or automation software and code), an idea that has been mooted by Bill Gates, but economists have many concerns with such an approach, both practical and philosophical. Similarly, subsidising algorithms that complement rather than substitute seems like a noble idea, but just the practical implications are mind-boggling: who will decide whether Hanjo’s algorithm displaced my job or made me more productive?

Ultimately, perhaps the best we can hope for is a society where a small but competent government can redistribute some of the proceeds of automation to those who are displaced by the rapid change of technological innovation. How this will be done is a subject of much future debate. Hopefully, though, the Hanjo’s column-writing algorithms won’t improve fast enough to substitute my own ability before these debates are resolved.