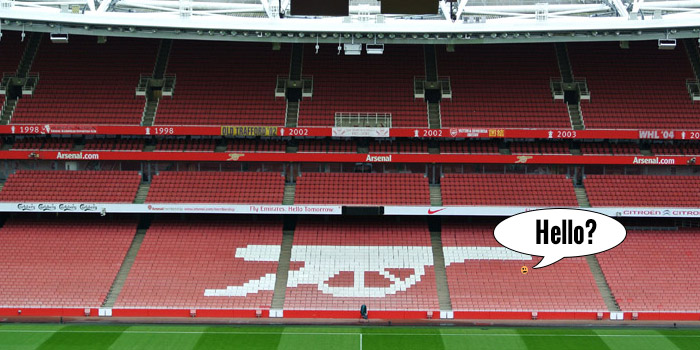 I miss sport. I miss following my favourite teams, the bloggers who write about them, the news about new recruitments, arriving at a friend’s house on match day, the intensity of a big rivalry, the gloating after a win, and, yes, even the agony of perennial disappointments (and, to be honest, there are many if you’re a Protea, Stormers and Arsenal supporter!).

Sport, I now realise more than before, has a way of bringing people together like no other social event can. On a big match day, I could have the same conversation with people of all walks of life, men and women, black and white, rich and poor, in multiple languages. I miss those interactions with my fellow South Africans. We, more than any other nation, know only too well how sport can unify. Thousands of people gathered for the Springboks’ parade after their World Cup win last year. The 1995 World Cup win was so momentous, some of the biggest names in Hollywood even made a film about it.
What that film, Invictus, also demonstrated, was that sport is – and has always been – a powerful political tool. Karl Marx famously said that faith is the opium of the masses. But sport, I would argue, is our new faith. Stadiums have replaced temples, cathedrals and mosques as the most prominent buildings in our cities. Many of us spend more money on our favourite teams than on our favourite theology. And we almost certainly dedicate more of our most precious resource – time – to sport than religion.

To what end, you might ask? Has this new faith helped us build a better society? A new paper published in The American Economic Review shows that it has. The three authors do two things. They first use recent statistics on the matches played by the national football teams of African countries to test how match outcomes effect citizens’ self-reported national identity – whether you consider yourself, for example, Zulu first and then South African, or the other way round. They then take those same match outcomes and test how winning increases or decreases the like civil conflicts between ethnicities.
To answer the first question, they use the Afrobarometer. Administered in 25 African countries since 2002, this survey asks detailed questions about respondents’ attitudes towards people of a different ethnicity or about the level of trust in their government. Afrobarometer field workers can’t survey everyone at once, of course: Over the course of several months, field workers go from house to house to collect this information. What makes the paper so interesting is that the authors use this variation in timing of the survey questions to look at how respondents answer questions just before and just after their national football team played.

I was surprised by the size of the results. Individuals surveyed in the 30 days after an important victory of a country’s national team are 37% less likely to identify primarily with their ethnic group, and 30% more likely to trust other ethnicities. That is substantial. In many cases, it switches the primary identification from the ethnic to the national level. And the effect is asymmetric: There is no effect of national team defeats on self-identification.

It is one thing to feel more patriotic towards your country, but quite another to actually change your behaviour. That is the second, and more important, question the authors ask: Do national victories affect civil conflict? To answer this, they combine the football data with data on the occurrence and severity of political violence events. They then exploit the randomness of qualification for the Africa Cup of Nations: They compare two teams in the same group that, going into the very last round of matches, could still qualify. The team that qualified is the ‘treated’ group and the team that (barely) failed to do so, is the ‘control’ group.

Sport, it turns out, is indeed the opium of the masses. Teams that qualified experienced significantly less ethnic conflict in the following six months than countries who (barely) didn’t. As the authors note: “this effect is sizable, significant, and appears to be quite persistent, lasting up to several months after the event”.

A few things are worth highlighting. The effect is driven only by victories in high-stakes official games (like the Africa Cup of Nations and FIFA World Cup qualifiers and finals). The effect is substantially higher for victories against traditional rivals. It is similar for wins at home and for away games, suggesting that the effect is not driven by those actually attending the match. One conclusion I find particularly enlightening is that “the effect of victories is stronger the more diverse the ethnic composition of the national teams”.

We may think of these results as curiosities. But that would be a mistake. As a consequence of the Scramble for Africa and the arbitrariness of borders drawn up by colonial powers, many ethnic groups within Africa are fractured across country borders. This has often been a cause for conflict, both civil and international. Countless experts have tried to find policies that would encourage ‘nation building’ – from mass schooling and military conscription to infrastructure building and resettlement programmes – but with limited success. Such policies require not only vast resources but also a competent state, both of which, as a consequence of these ethnic divisions, are usually in short supply.

This paper offers a much cheaper alternative: nation-building through sport. Francois Pienaar or Siya Kolisi lifting the William Webb Ellis trophy weren’t just historic moment moments, they had very real positive consequences. In these times when sport is a fading memory, let’s not forget that it can serve a much bigger goal.