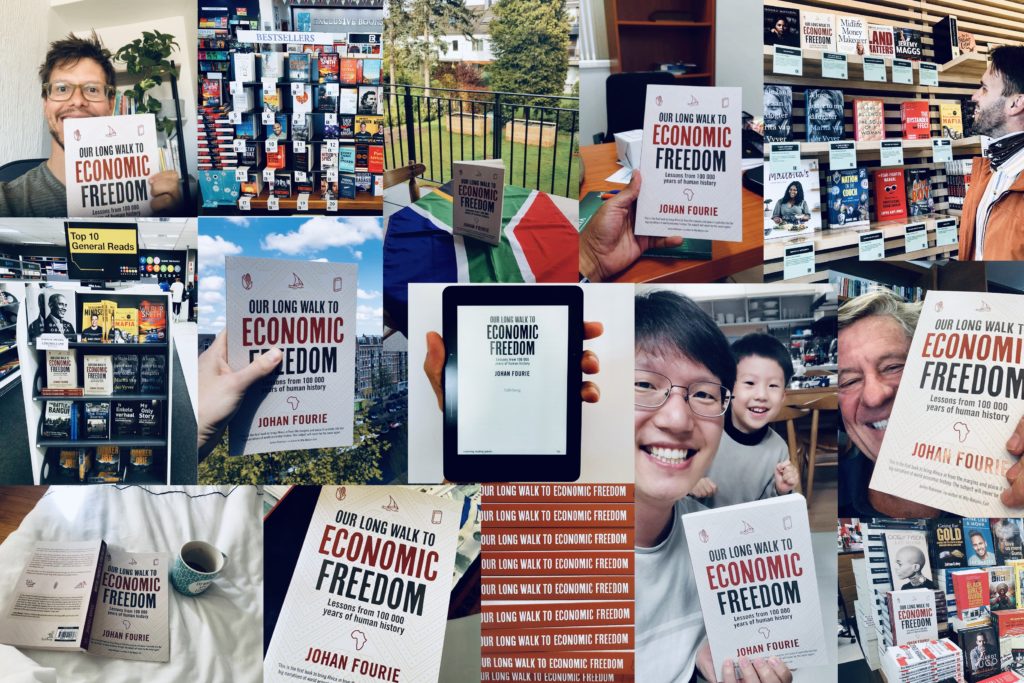 Our Long Walk to Economic Freedom has now been on South Africa’s bookshelves for a month. It is still wonderful to walk into a bookshop and see the book on display. It is even more wonderful to see someone pick it up and purchase – and I have once or twice had to use all my restraint not to walk over and introduce myself. I’ve received wonderful feedback from many readers – economists, historians, old friends, new friends, former students, future students. I appreciate each and every message – thank you!

Many have asked whether it is tough to write a book. Yes and no. No, in the sense that it helped that I knew what I wanted to say. I’ve been teaching Economics 281 for more than a decade, which gave me ample time to fine-tune them. But yes, there were also difficult times. Surprisingly, the closer I came to the final chapters, the more difficult it became. I guess that is because initially I had the freedom to try many things, but towards the end, I had set a certain standard I wanted to maintain, and the pressure was on to do so. For those who have not yet read the book, there are 34 chapters of about 2000 words each, and, with one or two exceptions, I basically wrote them in chronological order. I finished the first 16 during hard lockdown last year, and then had about four months to do the rest.

My favourite chapter? That is hard, but I guess I would choose the one I wrote last, mostly because I was dreading it most. Who were Fannie Mae and Freddie Mac? is a chapter about the global financial crisis of 2008/2009 and, given the many experts on the topic, I feared that I won’t be able to do the topic justice. But ultimately Iceland provided a wonderful setting not only to discuss the crisis, but also to refer briefly to cryptocurrencies and their future impact.

What I did not expect when I finally submitted the first draft, was how much work it would be until a final draft. Three rounds with my editor and another three rounds with the proofreader. (I’ve only found two typos so far and I’m sure most readers won’t even notice it, so a big congratulations to them!) But the writing and the editing was only half the work. Now that the book is out, I’ve been forced to become a marketer, entrepreneur and, alarmingly for an economic historian, a media commentator. I’ve appeared on Bruce Whitfield’s The Money Show, on Bloomberg Quicktake with Scarlet Fu and on Waldimar Pelser’s KykNet Verslag. It’s been a roller coaster of experiences.

This week is a big one. On Wednesday evening at 18:00 I will be interviewed by Dr Mamphela Ramphele at an Exclusive Books virtual event. The event is free and you can register here. On Thursday evening at 20:00, Theo Vorster will interview me (in Afrikaans) for Netwerk24. There are also upcoming vodcasts/podcasts on polity.org.za with Thabi Madiba, The Small Print with Bronwyn Williams, the Free Market Foundation with Chris Hattingh and a few others. Check out ourlongwalk.org for updated links.

I should also mention that the success of the book – my publisher tells me that sales after the first month are ‘far above expectations’, which could of course mean one of two things :) – is the result of many who have recommended the book to others, written kind reviews on Amazon or other platforms, posted Instagram photos and videos, and, somewhat embarrassingly for me, mentioned the book during a graduation ceremony! I’ve been invited to talk to a variety of audiences, from the Rand Club in Joburg and Sakeliga in Pretoria, to StelliesHive, the Stellenbosse Landbougenootskap and the Suidoosterfees in the Cape. Covid-permitting, there are several more events in the pipeline.

But there are two people I want to thank in particular. Mike Cruywagen of Nudge Studio not only designed the book’s timeless cover, but has also done wonders with the website. He (and his partner, Stefni) are also responsible for johanfourie.com, LEAP and the Biography and Cape Panel projects. I recommend their services highly.

Second, Philip du Plessis of Blindspot films is designing a series of short clips that I will use to market the book to local and international audiences. The first asks why economic development is not like a game of Monopoly. Phil is a documentary filmmaker, and as these videos should make clear, he has an exceptional touch in telling stories in an entertaining and accessible way. He also did magic things with the Biography video, a short documentary that was released last month to disseminate the work my students and I do. If you have an half-hour, and are interested in South African history and the interesting ways big data can help ask new questions and illuminate older ones, make sure to watch it here.

I’ve had several questions about when the book will be available outside South Africa and Namibia. The answer depends entirely on whether an international publisher is interested. The same for translations: I would love for Our Long Walk to be translated into French and Swahili, two languages that cover much of the African continent. Let’s hope.

Ultimately, though, I measure the success of Our Long Walk less in sales numbers and more in the feedback I receive from readers all across the world. One South African reader sent a letter saying ‘I was engrossed by the book’. One reader from the UK suggested it is ‘a huge achievement that many will admire and envy’. Bruce Whitfield called it a ‘fabulous, fabulous book’. Writing a book is a big investment. Those comments make it all worth it.