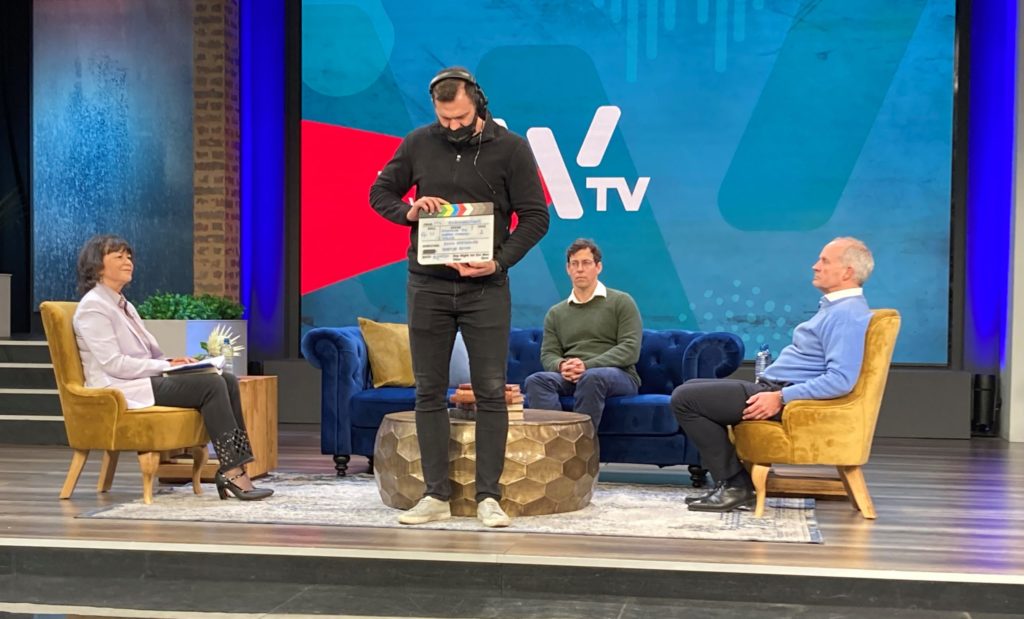 One of the more surprising things to happen to me this year is the invitation to appear on TV shows. Let me be frank: this is not something I look forward, nor enjoy. I’d much rather talk to a live audience (or a classroom) than in front of a camera. But as comfortable it is to work from home, typing away, it’s also important to get out and challenge those comfort zones. And so I said yes to a couple of things I would not normally say yes to.

A few months ago, I spoke on Tussen Ons, an Afrikaans talk show, about my book, Our Long Walk to Economic Freedom. This coming week, I’ll be speaking to Rachel Jafta, professor of Economics and director at Naspers, and Gerrie Fourie, CEO of Capitec, about the prospects of economic freedom in South Africa at present (see picture). The discussion – prerecorded and one that I actually enjoyed a lot – will be broadcast on Wednesday at 09:00 on Woordfees TV (DStv channel 150). The discussion was in Afrikaans and touched on everything from machine learning to the prospects for the continent.

For my sins, I was also convinced to participate in the Woordfees ‘Beste professor’ series. (Had I known that that would be the title, there is no way I would have said yes.) I decided to present two projects I recently worked on: the Cape Colony settlers and the Spanish flu. The 10-minute lecture – Suid-Afrikaanse geskiedenis met syfers – will be on the same channel on Thursday morning at 07h29. It will have English subtitles.

The one thing I’ve realised since the publication of Our Long Walk is that only 50% of the effort in writing a book goes into actually producing it. The hours following publication – the book talks, podcasts, radio interviews and, yes, even TV shows – eat up far more time (and energy) than I could have imagined. (I’ve kept a record of these on the Our Long Walk website.) But despite the unexpected time investment, it’s been wonderful to engage with audiences beyond the class and seminar room. It’s a pity that I could not do more of this in person; those that have been in-person, like The Economist event in Sandton last week or an event at the Norval Foundation two weeks ago, were super energising. It really is nice to get out, meet people and not have to talk into a camera and screen all the time! But Zoom has also been a blessing. It has allowed me to reach audiences I would never have been able to reach. Only last week I gave a book talk at Wageningen University. As the economic historian Felix Meier zu Selhausen remarked in response to my talk, it is wonderful to see a broader audience engage with the work that an entire community of African economic historians have contributed to. Writing research papers are necessary, of course, but disseminating research beyond the lab or the classroom is equally important. Hopefully, Our Long Walk will encourage a new generation of scholars to enter the field.

Now that Covid numbers are falling rapidly in South Africa, I’ve also decided to push ahead with an in-person book launch. For those in the vicinity of Paarl tonight (Monday, 4 October), please join TJ Strydom (author of Christo Wiese: Risk and Reward) and me at the Winelands restaurant at Boschenmeer for a lively discussion on history, technology and the future of South Africa. 18h00 for 18h30. Entry is free. I hope to see many readers there!