The economics book you did not know you needed 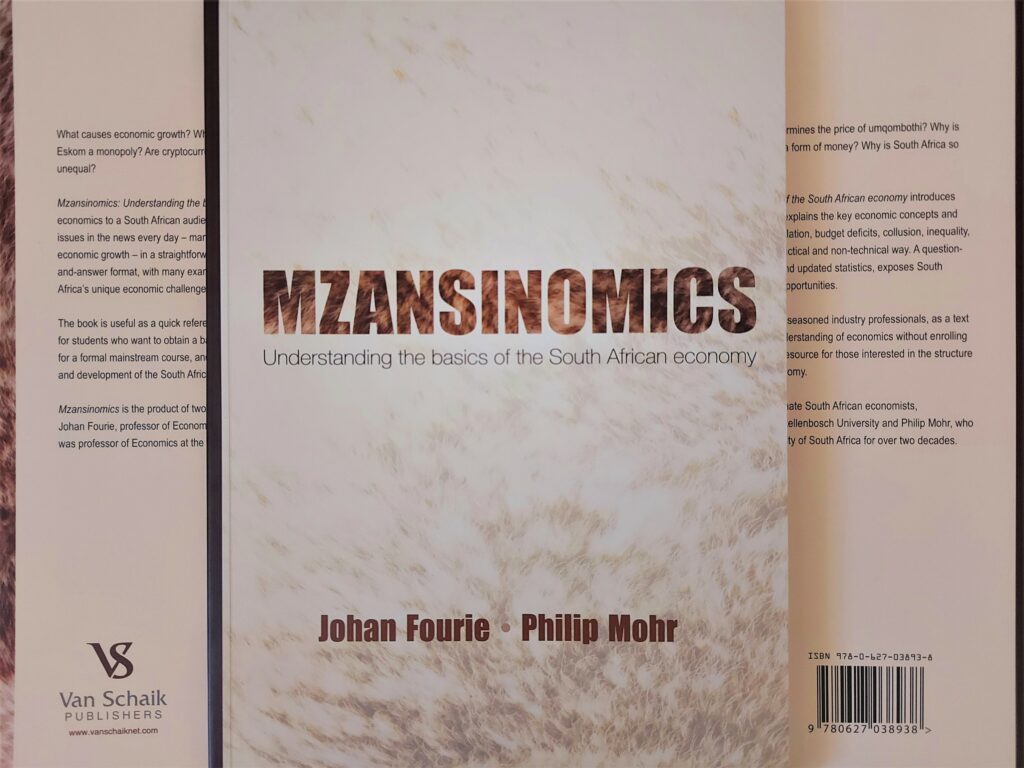 When I was an Economics second-year student, we were required to buy an Economics textbook by Philip Mohr for one of our courses. It was different in many ways from all our other textbooks: thinner, with fewer pretty pictures and graphs and much cheaper. (Its cover was also decidedly unsexy.) But it was different in another respect, too: it was the only textbook I ever used after completing the course.

That is because Philip’s book was packed with useful things that I frequently needed to know but always seemed to forget. What are the three characteristics of money? What is included in Gross Domestic Product as opposed to Gross National Income? What is the difference between the broad and narrow definition of unemployment?

When Philip Mohr phoned me two years ago to ask whether I would consider collaborating with him on an introductory guide about the South African economy, I said no. I did not have the time. I was busy with another book. I had too many projects and too many students and are there not too many economics textbooks in any case?

But then Philip’s agent sent me his 2010 Understanding the South African economy. Here was a book that offered what any informed South African should know about the economy, even if they have never studied economics and have no predilection for supply-and-demand graphs. It was also eloquently written – in a question-and-answer format that made even tricky topics, like inflation targeting or growth theory, accessible to everyone. So, against my better judgement, I changed my mind, and signed up to revise and update the book.

Mzansinomics was published this month. Updated and expanded (and with a prettier title and cover), Mzansinomics, as the preface explains, has two explicit goals. The first is to offer the reader an introduction to standard economic concepts. The second is to discuss these economic concepts from a South African perspective.

We are often confronted with a variety of economic concepts and issues, such as interest rates, exchange rates, inflation, unemployment, recession, economic growth, competition and the balance of payments. Economic issues affect our everyday lives and have therefore always been important, but it is probably fair to say that there is a greater awareness of these issues nowadays than ever before. Reasons include the communications revolution, the associated phenomenon of globalisation and, of course, the global economic crisis as a result of the Covid-19 pandemic.

Awareness, however, does not imply understanding. This book attempts to contribute to the latter by explaining key economic concepts, relationships and issues in a non-technical manner. Economics textbooks (even Economics for dummies) are cluttered with graphs and algebraic formulae. As a result undergraduate economics has been described as “curve-shifting economics” and postgraduate economics as “Greek-letter economics”. We wanted to avoid this. To do so, the book is structured in a way that helps the reader avoid getting lost in a maze of concepts. This structure also makes the book particularly suitable for use in courses for non-specialists. A question-and-answer format is used throughout, the questions being those that feature in economic debates in the media and those that are typically asked by interested non-specialists. The target audience of this book includes anyone who wishes to obtain a basic grasp of economics without enrolling for a formal course in the subject.

The second goal is to discuss these economic concepts from an avowedly South African perspective. Not only is
the formal study of economics quite technical and becoming progressively more so, but it is often littered with examples from the United States. There is good reason for this. Some of the world’s leading economists are based at US universities. Because of this, the US also attracts some of the best students from across the world, especially at the graduate level. But as we hope to show in this book, there is much to learn from understanding key economic concepts within the South African context. South Africa, and southern Africa more generally, has a history that offer valuable lessons in good and bad economics, lessons that have been studied by academic economists. This book infuses discussions of standard economic concepts with these research findings.

I would urge any South African high school Economics student (and teacher) or first-year Economics student (and lecturer) to have a copy of Mzansinomics on their bookshelf. So, too, should any South African entrepreneur, business manager or government employee. Just as I had found Philip’s earlier book useful, so, I hope, readers will find Mzansinomics a useful reference when questions about the impact of labour market regulation, competition policy, trade barriers or, yes, cryptocurriencies are discussed. We supplement these discussions with South African data and examples. And please, could I ask South Africa’s media houses to purchase a copy for their employees, especially those that still frequently confuse stock (Elon Musk’s wealth) and flow (South Africa’s GDP) variables!

Mzansinomics is published by Van Schaik Publishers and is available at Takealot or any good South African bookshop.