The unequal impact of the Spanish flu in South Africa 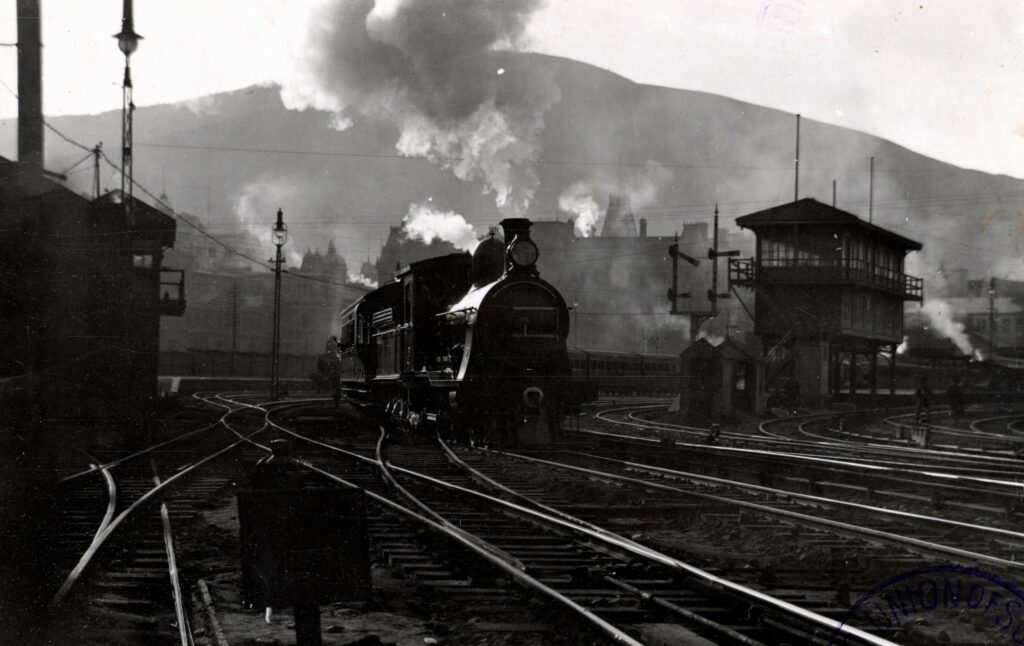 The 1918 influenza was one of the largest in history, killing at least 50 million people globally. (The death toll of Covid-19, by comparison, is around 20 million.) But the incidence of pandemic deaths was not random. Some countries suffered more than others. South Africa was one of the most heavily affected, with around 6% of the country’s population dying – or around 300 000 people. 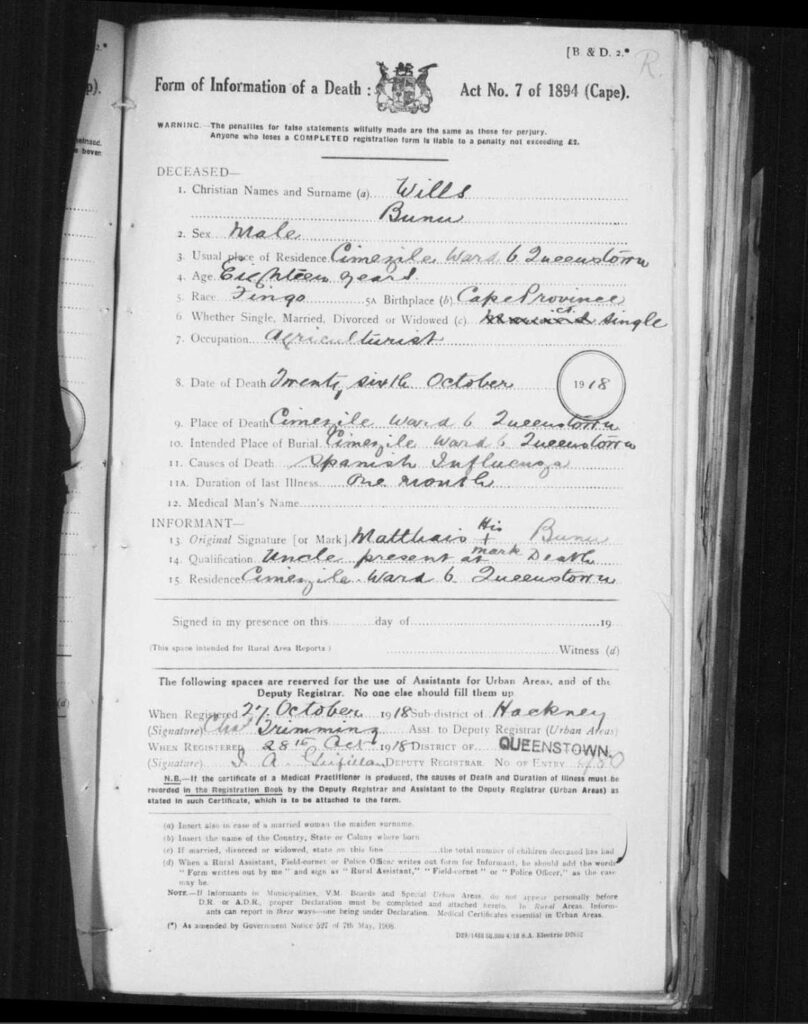 The incidence of influenza was not only distributed unequally, but it also exposed existing health inequalities – and exacerbated them. That was the hypothesis Jonathan Jayes and I wanted to test in a paper that was published last year in World Development.

To do so, we used almost 40 000 death certificates from the Cape Province of South Africa. These certificates – like that of Wills Bunu in Figure 1, who died on 26 October 1918 – provide a wealth of information about the deceased. We focused on 15 districts and transcribed death certificates between the years 1915 and 1920 (see Figure 2), to allow us to measure pandemic mortality relative to earlier mortality. That is how we could expose the increase in health inequality.

How do we measure health inequality? We use a novel approach. Each certificate was to be signed by a health official. However, in many cases, this did not happen. We use the signature of a health official as a proxy for access to medical services. This is, of course, not a perfect proxy; it may be that an individual had frequent visits to a doctor, but then died while traveling. The signature also does not suggest anything about the quality of medical treatment; it is very likely, for example, that the deceased individual never met the doctor who signed their death notice while they were alive. It is best to see this proxy as a simple measure of the likelihood that an individual would have had access to medical services. 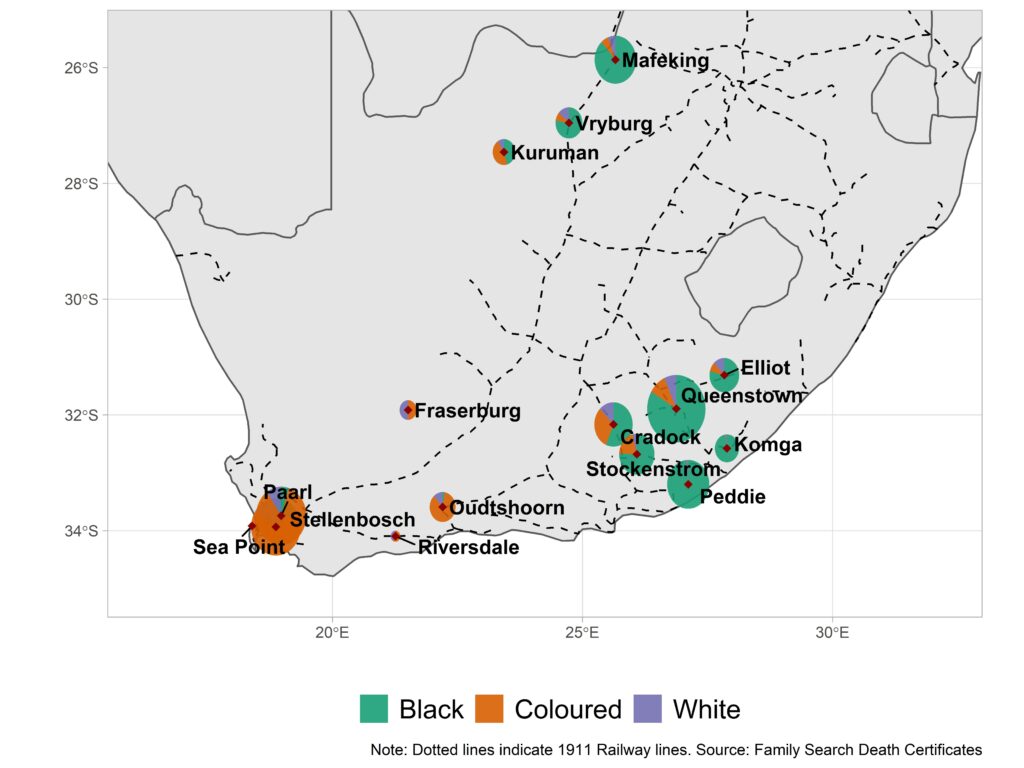 First, some context. The Spanish flu arrived in two waves in South Africa. The first was mild and spread rapidly through Natal and the Transvaal, notably on the gold mines. Few deaths were, however, recorded. The second wave arrived in Cape Town with soldiers returning from World War I. It then spread along the railroad. October 1918 became known as Black October. Figure 3 shows the sudden increase after 10 October, around two weeks after the virus had arrived in Table Bay. The graph plots ‘Spanish flu’-deaths by race. It should already be evident that black residents had the highest incidence. The second part of Figure 3 also shows that the pandemic, in contrast to usual mortality rates, had a ‘W’ age distribution, with many deaths not only at the very young and old, but also the 20-35 year range.

We then plot, in Figure 4, the likelihood of accessing medical services (as proxied by having a medical officer sign the death certificate) by race and gender. The first thing to notice is the levels. White residents are most likely to have access to a doctor; on average, eight in ten had access during outside of the pandemic period. Coloured residents (‘coloured’ being a specific, non-derogatory term for one of South Africa’s four population groups) had slightly poorer access, around seven in ten, on average. Black residents had much lower, around three in ten individuals, on average. South African society was already, by the 1910s, a highly unequal society. (With the exception of gender inequality, as can be seen from Figure 4, a result confirmed by extensive regression analysis. This is something worth exploring in future.) 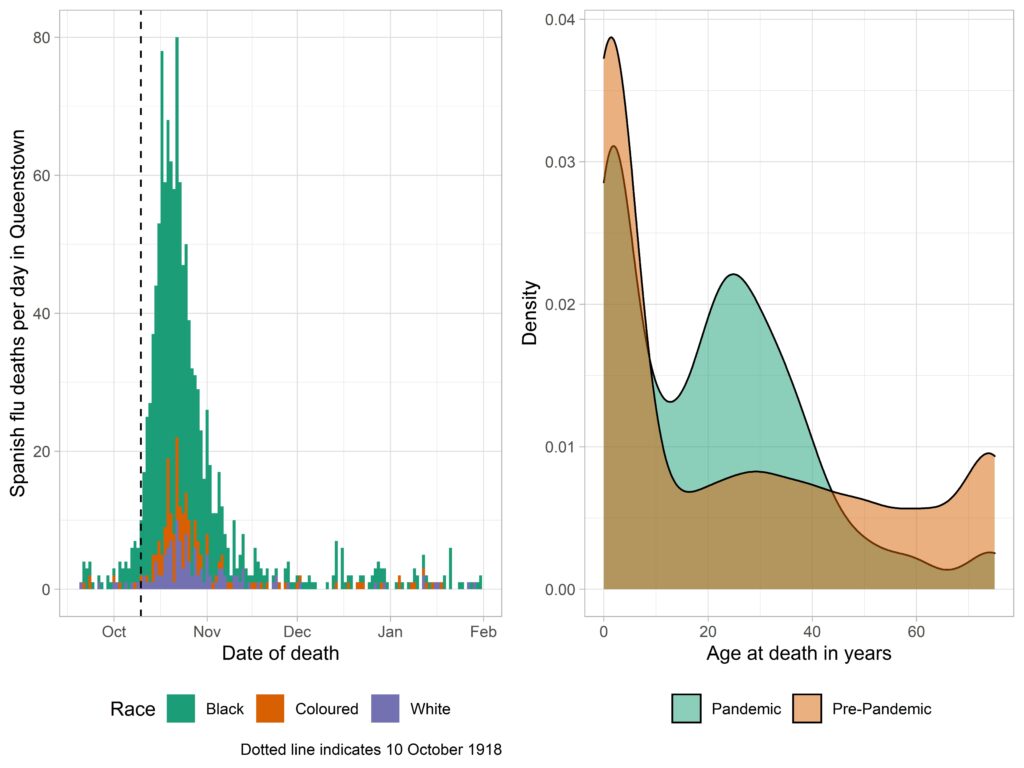 In the paper, we test several reasons for these larger inequalities, on both the demand and supply side. We show that social networks matter; the likelihood for a death in the family increase four-fold for black households, compared to two-fold for white households. There may simply have been fewer family members to request medical services when everyone fell ill. Wills Bunu, the young man whose death notice appears in Figure 1, lost five family members in October before he himself died.

On the supply side, it might be that (white) doctors simply resisted seeing coloured and black patients. To investigate this, we use another novel measure – an augmented Whipple index – to identify whether doctors were more likely to misreport coloured and black patients’ duration of illness. We find no evidence of discrimination using this technique. This accords with anecdotal evidence of the time. Following Black October, Dr. Abdullah Abdurahman, a leader in the coloured community, was happy to express ‘the thanks of the coloured community to those citizens who had so ungrudgingly and unselfishly helped them during the Epidemic’ (Phillips, 1984, p. 58).

The most likely result is that income – the ability to afford medical services – best explains the widening gap. Wealthy residents are likely to have had not only higher incomes but more savings. We also note that urbanisation may have contributed; coloured residents, in particular, often lived in in dense urban settings where medical services may have been particularly constrained during pandemic times.

What is clear is that the 1918 influenza caused existing large racial differences to be exacerbated. It is an important lesson for today, when evidence of similar widening racial gaps is emerging.

* An edited version of this post first appeared on the Long-Run Health Matters blog of Daniel Gallardo (Wageningen University).